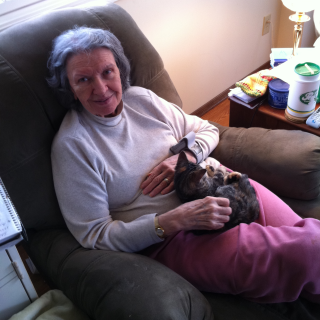 I just started following a blogger whose husband is ill and she has to care for him.  Almost all her thoughts and moves are affected by how her husband will react.   She plans her life around him and his needs.

I understand where she’s coming from; I, too, was once a caretaker for my husband.  Keeping him safe and happy was my life’s work.  It was difficult at times, but mostly it was rewarding.

And this is why:

We were in our late 70’s when he became ill.  Our children had long left the nest and lived in other towns.  We’d lost two sons, along with many other friends and relatives.  We mostly had just each other.  I was a retired psychiatric nurse, and chose that profession because my heart went out to those in need and I wanted to help them.  I especially related to the sick, as I’d been quite ill as a child, often separated from friends and family, trying to deal with my fears and discomforts alone.  My mother took good physical care of me but was too busy or unaware of how to comfort a sick, scared child.  She never spoke of or explained my illnesses to me.  Basically, I was just put to bed in a bedroom and left to my own devices.

Mother had always wanted to be a nurse, but she lost her father and brother before penicillin was discovered and had to quit school and go to work to help with the family bills.  Her nursing aspirations were carried into her adulthood.  She saw that I and my bed were clean and that I was well fed.  When I had Scarlet Fever, she rubbed my rash with calamine lotion.  She boiled my sheets and everything that came out of my room.  When she learned that I had Rheumatic Fever, she cried on the bus on the way home from the doctor’s.  I knew then that something bad was wrong with me, but I had no idea what it was or what was going to happen.   The treatment for Rheumatic Fever back then was bed rest.  There were no medications to treat it with.

Anyway, after I retired as a psychiatric nurse practitioner, I missed practicing my calling.  And with the boys gone and no one to take care of, I needed a reason to get up in the morning.

My husband was a strong, controlling individual.  He made the important decisions in our family, and I was happy to let him do that.  I’ve always been a sensitive, introverted individual, never really sure of myself, afraid to take the initiative.

Then, after Forrest became ill, first with Alzheimer’s, then with COPD, hypertension, diabetes, kidney dysfunction, and colon cancer, I gradually had to become the decision maker and performer of all the household duties.  I gained confidence, and, in fact, enjoyed being responsible.

But most of all, I enjoyed taking care of my husband—cooking his meals, buying his special treats at the grocers, seeing that he had his oxygen, clothes to keep warm, bringing his meals to him in the TV room after it was too much effort for him to come to the table, taking him to his doctors’ appointments, wheeling him in the wheelchair.  We’d sit on the patio, watch the birds build nests, the trees grow, flowers bloom.   Sometimes, we’d watch TV together, or I’d watch while he slept in a chair across from me.  We were together.  We connected.  Not only was he allowing me to care for him, he was enjoying it.  Sadly, it was our best time as a married couple.

The woman I spoke of at the beginning of this blog lives in Australia on a bird farm.  Our experiences with illness are not quite the same, but, still, I can empathize with her.  Her blog address is:  http://jmgoyder.com/    She’s courageous, admirable and an inspiration.  I think you might find her blog worth the visit.

She had her first grooming since her move to Missouri.  I hired a woman who drives a mobile unit and does the transformation in the driveway.   This week, she had to park in front of the house as there were other vehicles in the drive.

Jenny was at the door in a hour, looking like a little skinned rat!  My sweet girl has been hiding under a huge fur ball and now she’s clipped almost bare.  The top knot too short and her ear hair cut in half!  Her beautiful, long, lovely ears!  I wish I knew how to transfer photos from my iphone to wordpress, but, sigh, I haven’t learned that yet.  I hope the top knot and ears will grow out again.

She’s still sweet and lovable and my best friend.  She follows me everywhere I go.  This minute, as I type these words, she’s snuggled up against me, sleeping.

It’s 7:00 P.M.  Ken’s been gone since 3:00.  I keep the TV on to drown out the silence.  I have such a hard time being alone.  I loved it when I worked three jobs and had family coming and going.  Then, time alone was rare and precious.  Now, I have entirely too much of it.  The warmth of my loyal companion is relaxing and soothing.  I’m so grateful she’s in my life.

Some days, I can’t do anything without feeling dizzy and light-headed.  If I try to cook or empty the dishwasher, even in my wheelchair, I feel as if I’ll pass out.  So I have to be content to do nothing.

Every time I have a day like this, I become discouraged, believe I’ll never feel ‘normal’ again, whatever normal is.  To me, it’s being able to walk through my house without the aid of a walker or a wheelchair (though I’d welcome a walker today); cook and bake the way I used to; drive; walk my dog, play with her outside, visit my friends; go shopping; go to church; do the laundry and other chores when they need to be done, not having to wait for a ‘good’ day.  Or even just to get up and walk across the room to look out the window or turn on a light.

I think of the things I used to do and realize how much personal freedom I’ve lost.  When I was 80, three months after Forrest died, I sold my house, had an auction and moved to Connecticut all in one month.  Now, five years later, I’m in a wheelchair.  Actually, a year after Forrest’s death, I started using a walker.  Just months later, the wheelchair.

I’ve seen doctors, had tests;     No one can make a diagnosis.  It’s obvious that I have high blood pressure but my heart beats steadily, though I do have a condition called paroxysmal atrial tachycardia which sends me to the ER when I have an episode (not often).

I knew one day I’d get old and have to slow down, but I never dreamed I’d not be able to walk.  It was a blow when I could no longer dance.  I loved dancing.  Such a freeing feeling. Now I’d be deliriously happy if I could just walk and feel normal.

Today I had to cancel a dental appointment.  My teeth really need to be cleaned and it takes so long to get an appointment.   Making appointments is tricky.  Fitting Ken’s time in with office time.

Then there are the better days when I can wheel lickety-split through the rooms of the house, stand, walk with the walker, fix a meal without feeling I’m going to faint, perform light chores…   I’m a completely different self.  And I don’t know why.  I keep looking for answers so I can make all days better.  I appreciate them so much when they occur.

At my age, you realize that you’re not as in control of your life as you once thought.  There’s not much in life you can depend on 100 %.

I try to accept what is and go on with my life.  Find things I can be grateful for–the beauty of nature, my sweet companion dog, JennyPenny, what family and friends I have left, my books, computer, telephone, my mind, a house I like, funds which I hope will last me the rest of my life if the economy will allow it, the list goes on.  I’d like to add faith to that list but there are questions, doubts to overcome.  That’s for another day.

This is not an uplifting blog.  I started it to find answers, to become acquainted with myself.  And to present that self to the world.

Jenny Penny has been with us for two weeks now and she’s feeling at home.  She’s stopped using the deck for a toilet; runs down the ramp and dances in the grass, as if to say, “Hello grass!  I’ve missed you!”  And she goes alone while I wait at the door.  When she’s finished her job, she runs to the door, tail up, and jumps up  onto me, expecting lavish praise, which, of course, she gets.  When she’s excited, she spins and jumps and can hardly contain her joy.  She’s my constant companion; follows me wherever I go. When I’m seated, she stays close by my side, or in my lap.  She’s generous with kisses.  What more could I want?  I love this little sweetheart.  She’s my angel, my savior.  Life is good again.

She’s 10, a red mini-poodle, on the small side.  She joined our family last Friday after a long flight that lasted all day, with two lay-overs.  She was tired and scared when she arrived.  My joy at having her was tempered by the knowledge that she was ripped from her other family and the only world she’d ever known to be with me.   I’m humbled and honored to be her new mother and I’ll do all in my power to make her comfortable and happy.

She’s eating well, drinking water and going outside to potty.  She does a happy dance (twirls in circles) when she’s excited, especially when she knows she’s going to get her thyroid pill wrapped in a piece of cheese.   She was very nervous about the cats at first; and though she’s still  not interacting with them, their presence in the room no longer makes her shake.  She mostly ignores them.

She’s a sweet, mild-mannered little soul and I love her already.